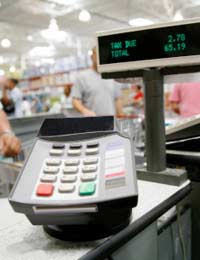 Dave Green’s small repair business was floundering due to cut price electrical goods being sold in high street supermarkets. He could not compete with knock down prices on televisions and computers so what could he do?

“Over the past couple of years my business had declined. I have a shop in a small town and sell brown goods and do some repairs. I’ve had the shop over twenty years and it has always provided for me and my family well. The problem started when two out of town supermarkets opened within miles of my shop. They sold all sorts of goods; I even went there myself to save money on my weekly grocery bills.

It was after I met an old customer who always bought their electrical appliances from me and they mentioned a new video recorder they were having problems with. I popped in to see them; I always take care of my customers and don’t mind the odd free visit if I’m, passing. It’s all part of my customer care. I found a strange video recorder sitting under the television which had not been purchased from my shop. They explained it had been a bargain and purchased when they visited the supermarket. Usually I would have fixed their problem for nothing but this did upset me as I felt they had been disloyal to all the good service I had provided over the years. It was a simple setting up problem and yes I charged them and pointed out that had they bought it from me the item would have been set up in their home free of charge along with help on how to use the machine, something supermarkets do not help with.

Close or Fight Back?

Back home I realised that these supermarkets were the reason I was losing money. I could not compete with low priced goods which to be honest I would not even give the light of day to as so many were made overseas and were not up to my expectations of good workmanship. My wife thought perhaps we were looking towards the end of our days in the shop, but I cannot afford an early retirement I would have to fight back. I called a family meeting and along with our two teenage children we tried to work out what we could do. David (16) said we should try selling other types of stock but electrical goods were not the answer. It seemed all his mates wanted to buy was computer games and could we sell them? This gave me the spark of an idea. I could sell second hand games and programmes and David could run it for me. He needed a part time job and as most of this would be done at weekends and after school hours it suited him. We set up a section of the shop and he has passed the word around his school.

My wife Diana was more thoughtful; she did work in the shop to help out but had always thought it was too large for what we needed. She sat with a pen and paper and sketched carefully. What she planned was to partition the shop and rent out one third of it to another business. Perhaps a new start up that wouldn’t be able to afford larger premises or the cost of expensive rentals. After all we would not be selling as many large televisions so would not need the room. Within weeks just by talking to other traders in the area we found a young woman who wanted to start her own florist business. We didn’t have one nearby so we shook hands and had our first tenant.

A year on from our meeting and things are improving steadily. For my part I handed out leaflets outside the supermarkets offering a delivery and set up service for people buying electrical goods from the stores. It seemed to work and has kept me busy. Who knows what the future will bring but me and my family will face it head on. Oh, and I now only shop locally helping other small businesses to survive!”
Next Page